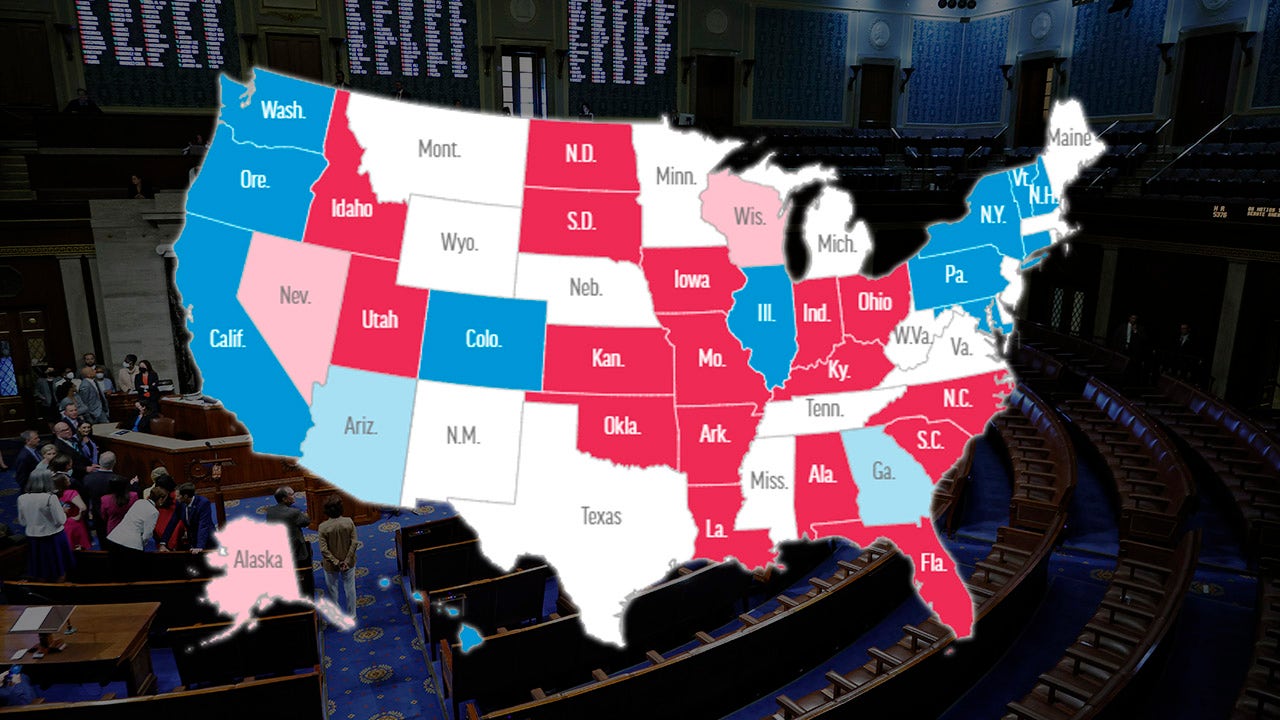 Control of Congress was at stake Wednesday as Democrats showed surprising strength, beating Republicans in a series of competitive races and defying expectations of high inflation and President Joe Biden’s low approval ratings. would drag the party down.

After the 2020 election, the Senate was split evenly between Republicans and Democrats, with Vice President Kamala Harris giving Democrats the deciding vote.

Democrat John Fetterman overturned a Republican-controlled Senate seat that is key to the party’s hopes of retaining control of the chamber. It was too early to call critical Senate seats in Nevada and Arizona that could determine the majority.

Republicans were favored to win the House in the midterm elections, exacerbated by frustration with the economy and the benefits of the redistricting process that occurs every 10 years. But Democrats have worked to hold on, campaigning to maintain access to abortion and other issues.

As of Wednesday morning, Democrats held seats in districts from Virginia to Kansas to Rhode Island, while many districts in states like New York and California had not been called.

With votes still being counted across the country, Republicans still had a chance to take control of Congress. But the results were eye-opening for Democrats who were bracing for steep losses and raised questions about the size of Republicans’ governing majority if they win the House.

What seats are up for grabs?

FILE – As the autumnal equinox occurs Thursday, the sun rises directly east over the dome of the U.S. Capitol, seen from the Washington Monument on September 19, 2022. (Bill Clark/CQ-Roll Call, Inc via Getty Images)

Seats for five of the House’s six nonvoting members were also up for election, according to Ballotpedia.org.

Ballotpedia notes that two special elections for the Senate were also held. A special election was held to fill the final four years of Sen. Jim Inhofe’s (R-Okla.) six-year term that began in 2021. Inhofe announced his resignation effective Jan. 3, 2023.

Democrats won three seats in the 2020 Senate election, bringing the party’s caucus total to 50, including two independents who caucus with Democrats. Republicans held the remaining 50 seats after the election.

What if Republicans control the House?

If the GOP takes control of the House, the Washington Post explains that the party could disband the January 6 Committee. The GOP leadership has not shown interest in investigating the Jan. 6, 2021 Capitol riot attack, with some party members considering investigations against Jan. 6 committee members.

The Post noted that some Republican leaders may come under pressure from some, including Trump, to use their power in the House to investigate Biden and his administration on several policy items, including the FBI’s search for Mar-a-Lago and the investigation into Trump’s fake election. fraud claims.

GOP House Leader Kevin McCarthy has already unveiled his “Pledge to America,” a broad outline of the economic, border security and other policies the GOP would propose in the early days of the next Congress, reported. the Associated Press.

What if the Republicans won the House, but the Democrats kept the Senate?

If Democrats were to hold the Senate and Republicans win the House, the two chambers would struggle to find common ground on the issues. But Republicans could try to win over Democratic Senate moderates on some legislation, the Associated Press reported.

In that case, if Republicans decided to launch an investigation into Biden and his administration, there was little Democrats could do to stop them. But the Washington Post reported that Democrats may continue to endorse Biden’s judicial nominations, which may be the only thing the party can do in a divided Congress.

Biden and Senate Democrats have worked to fill empty spots in federal courts across the country. The appointment of judges will impact Trump investigations and political disputes, including the president being forced to pursue a Trump-era policy of deportation, according to the Post.

What if Republicans win the House and Senate?

Republicans only need five (out of 435) in the House to secure a majority and only one out of 35 seats in the Senate. Despite Roe v. Wade says it’s still possible for the GOP to control both houses of Congress, according to the Washington Post.

Sen. Lindsey Graham (RS.C.) has introduced a law banning abortion nationwide after 15 weeks. Senate Republican leaders disagreed with the idea. However, if the GOP controls the House and Senate, there will likely be pressure from Republicans to pass an abortion ban, the Washington Post reported.

But with two years to go before a presidential election, Republicans have more incentive to block Biden’s agenda. That means Biden can expect Republicans to block all of his spending demands for pandemic aid, climate change and whatever comes up. There could even be threats of closure as both sides try to gain leverage in spending bills.

The Associated Press reports that a Republican-led Senate could pass bills sent from a GOP house, putting political pressure on Biden. And the GOP would regain control of the committees and, with it, the power to investigate and control the administration. According to the AP, a Republican Senate could also make life difficult for Biden by blocking or delaying the passage of the president’s nominees to the judicial and executive branches.

What happens if the Democrats win the House and the Senate?

If Democrats retained the House and Senate, they would likely restart negotiations on some of Biden’s agenda items that did not pass, including his new package of social and economic programs that stalled in the middle. of internal Democratic disagreements, the Associated Press reported.

The ruling party almost always loses congressional seats mid-term, and Democrats would not be affected if they lost a few House seats and a Senate seat. If Democrats take control of the House and Senate, The Washington Post reported they would have another opportunity to pass nationwide protections for abortion, same-sex marriage and voting rights. Democrats could also pass legislation tied to the president’s Build Back Better plan.

Another scenario if Democrats take control of both chambers is to find a way to block former President Donald J. Trump from running in 2024 after the Jan. 6 riot. The New York Times reported in September that Democrats were plotting various ways to disqualify him, including new legislation and preparing lawsuits to use a clause in the Constitution to label him an insurgent.

According to the New York Times, some anti-Trump Republicans and Democrats fear Attorney General Merrick Garland may pursue criminal charges against the former commander-in-chief for his efforts to nullify the 2020 presidential election. The Times explains that even if Trump were indicted and convicted, there is no law preventing him from even becoming president.

What would a Republican House mean for Biden?

Democratic priorities such as access to abortion, the fight against climate change and stricter gun control would immediately be pushed aside. And most, if not all, of Biden’s agenda would effectively be eliminated for the final two years of his term, the Associated Press reported.

Yet nothing becomes law without Biden’s signature. Bills to finance the government, raise the debt ceiling and address military issues are necessary for the government to function, the AP noted. These bills are likely to become flashpoints in negotiations between the GOP, Democrats and the White House.

Biden, who served in the Senate for decades, has often touted his bipartisan credentials and said he wants to work with Republicans. But there would be little interest in a GOP congress that opposes Biden, according to the AP.

The Associated Press contributed to this story. This story was reported from Washington, DC