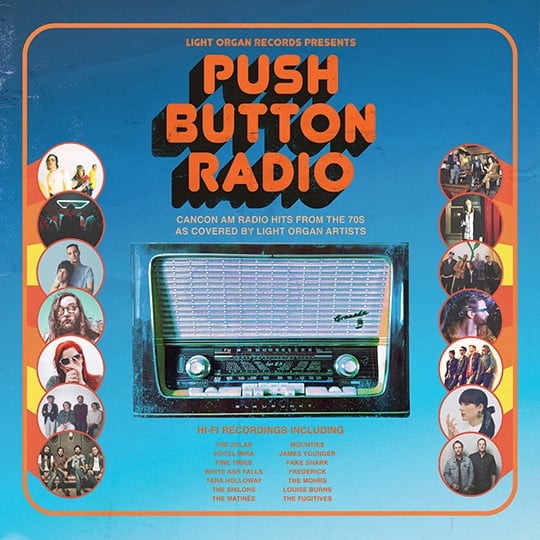 The best moments in music are often found in those moments of unpretentious life where you are in unpretentious places, taking care of the mundane, and a song sends your heart to the depths of longing, forcing you back to one. memory. Light Organ Records captured that very sentiment in a 14 song compilation album that seeks to recreate what you knew and bring it back to the forefront of your consciousness.

The release is a reinvention of CanCon’s’ 70s radio hits – each delicately restructured and performed by new age Light Organ recording artists, and their variety of styles and eclecticisms. The first five tracks from Light Organ Records feature Push Button Radio: CanCon AM Radio Hits From the 70’s Covered by Light Organ Artists, featuring Hotel Mira, The Shilohs, Mounties, Tara Holloway and The Fugitives are available now; the full LP is available December 10, 2021.

â€œWhen I agreed to write the backing notes to Push Button Radio, I envisioned it as a simple, enjoyable and easy trip down memory lane,â€ recalls Jonathan Simkin, president of 604 / Light Organ Records at Vancouver. “I hadn’t planned the intense mental journey that would follow …

“I started out by listening to the songs – both the covers and the originals,” he continues, “just to jog my memory.”

This is what each of us dares to do when we push play on the album; listeners are introduced to each new artist and their interpretation of classics that bring to life the sensations of years gone by. “I emailed the bands on our Light Organ imprint to see who wanted to pick up the CanCon AM hits of the 1970s, aware that some of these artists weren’t even alive in the 1970s, let alone to listen to music, â€Simkin says of setting his dream in motion. â€œI defined certain parameters: the song was to be released between January 1, 1970 and December 31, 1979; it had to be a legitimate radio hit; and it had to meet CanCon requirements, which meant that two of the lyrics, production location, music, and performer had to be Canadian.

â€œWe ended up breaking some of these rules, but that’s okay. In spirit, all songs meet the criteria. I sent a few suggestions, but left the choice to the artists.

Terry Jacks approves the record, which includes two covers of Poppy Family, performed by the Zolas and Lousie Burns respectively. From there, songs range from Andy Kim’s legendary “Baby I Love You” performed by The Shilohs, to Hotel Mira covering “Out of the Blue” by The Last Waltz, and even “Wonder Where The Lions” by Bruce Cockburn. Are â€as selected by the mounted police.

“Their version is a strange and wonderful wonder,” Simkin mocks the latter.

For kids who have spent their ears glued to ’70s pop culture, Push Button Radio offers a constant stream of pre-made classics that will take you back to the station wagons with wood paneled doors, bell bottoms, and a floral living room wrapped in plastic decor.

And for those who entered the chat at the end of the 21st century, the album becomes a history lesson in the music that shaped your parents, your grandparents; leaving a lasting imprint on the psyche of fans and music lovers alike.

According to Jonathan Simkin, today’s professor of the glory and excitement of ’70s vinyl, â€œTo those of you who are new to these songs, I sincerely hope you enjoy them and immerse yourself in them. in the originals! You will not regret it !

“And for those who were alive when the original songs were huge, I hope this music wakes your mind up and takes you on a safe and heartwarming journey into your musical past and your youth.”

Thank you for subscribing.

We respect your privacy and take its protection seriously