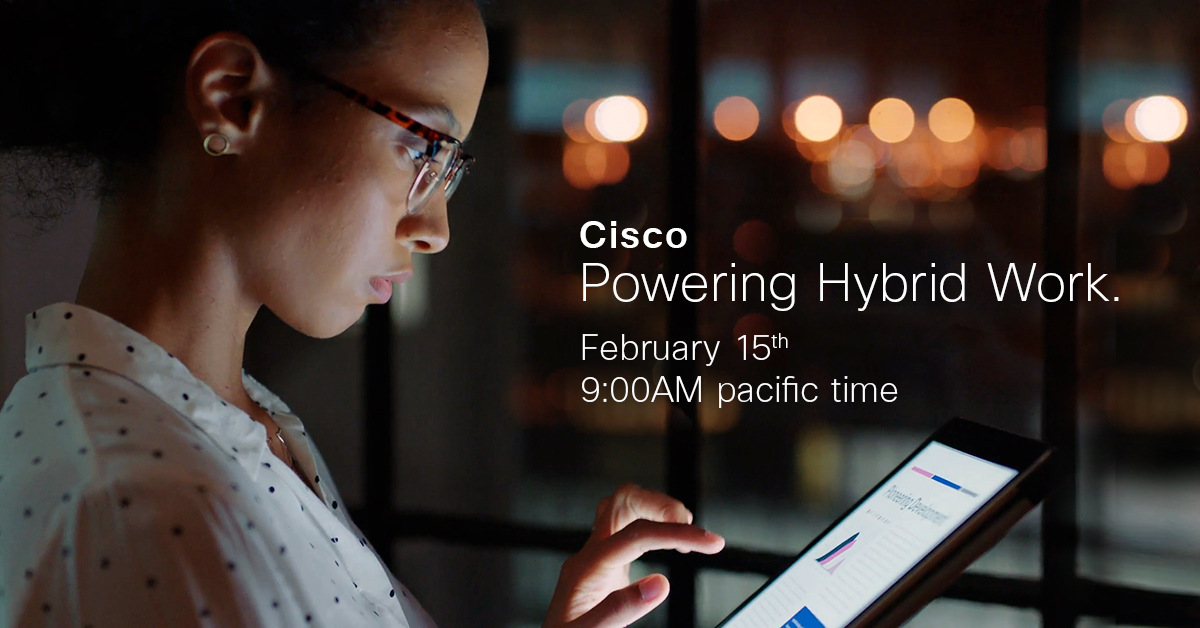 The last two years have taught the world that working from home can sometimes be just as effective as working in the office.

While there were people working remotely before the start of 2020, the onset of a global pandemic has dramatically changed the equation. A Gallup survey in the fall of last year found that 45% of full-time U.S. employees now work from home all or part of the time.

Additionally, two-thirds of employees in white-collar jobs reported working remotely. And 90% of already remote workers indicated that they would like to continue this arrangement in some way.

Statistics like these offer insight into the sea change taking place in the way the workplace is defined. This, in turn, redefines the business requirements for a flexible, scalable, secure, and cost-effective hybrid network with the lowest possible latency.

“Work isn’t somewhere you could go, but it’s a place you could be where you’re ultimately trying to get work done,” said Lawrence Huang, vice president of product management. at Cisco Meraki, a division of Cisco Systems Inc. “It supports that quality of experience no matter where you choose to work from. A big part of that is investing in infrastructure to support new ways of working.

Watch the full video interview with Huang below:

With its long-standing presence in the networking world, Cisco is in a position to significantly influence the technological direction of hybrid working. It has a 55% share of the enterprise network infrastructure market and at least half of the Ethernet switch business.

Cisco assessed the market opportunity for hybrid working and determined that the road to expanding network capacity and performance is through Wi-Fi 6E.

This special designation for the Wi-Fi 6 wireless standard broadcasts on the reopened 6 GHz band. It is part of the spectrum previously reserved for emergency broadcasts and is more than twice as wide as the 5 GHz band below. As an extension from a single-lane country lane to a multi-lane highway, the opening of Wi-Fi 6E provides an opportunity for significantly higher traffic volumes.

“What can customers do to increase the number of lanes they can support for wireless traffic? asked Huang. “A lot of them are looking to Wi-Fi 6E as the answer to help them do that. which we can obtain client devices.

In early February, Cisco announced plans to extend Wi-Fi 6E to the Catalyst 9136 and Meraki MR57 access points, which will double the amount of radio frequency spectrum available for Wi-Fi use.

Why is this important for hybrid working? One of the results of two years of pandemic is that business is increasingly conducted on video conferencing platforms. Wi-Fi 6E improves support for collaboration tools using 4K and 8K video.

“We’re seeing a growing demand on the networks, and that’s driven by some of the more recent trends,” Imam noted. “It will be a video-dominant hybrid workspace.”

Watch the full video interview with Imam below:

The expansion of the Wi-Fi highway is only one element in meeting the challenge of hybrid working. Another is to increase the engine power of devices that “ride” on it.

Even though Wi-Fi 6E offers the promise of greater capacity and better performance for platforms using collaborative applications, the routers handling the traffic can quickly become bottlenecks if they are unable to match application speed and throughput.

“Wi-Fi 6E makes multi-gigabit Wi-Fi possible,” Imam said. “Multigigabit high density is becoming very common as we scale our Wi-Fi networks because we don’t want our wired infrastructure to be the bottleneck when the wireless infrastructure is able to go more than one concert.”

To address this issue, Cisco unveiled a new series of core switches in early February, dubbed the Catalyst 9000X. The 9300X, 9400X, and 9500X/9600X switches are designed to support the traffic generated by increasing wireless capacity.

The latest iterations of the Catalyst line also provide insight into Cisco’s evolving strategy around silicon. The new 9500X and 9600X switches include Cisco Silicon One Q200 ASICs.

Until this recent announcement, Silicon One had only been implemented for web and service provider scale networks. Silicon One’s integration into the Catalyst offering provides enterprise customers with scheduling flexibility and reduced power consumption for vertical industries seeking increased levels of capacity.

“With Silicon One, we take it to another level,” Imam said. “Silicon One brings the capabilities of the Unified Data Access Plane ASIC and unlocks the scale and high performance of enterprise switches.”

Cisco released a significant amount of detail about its Wi-Fi 6E and Catalyst deployments as part of the hybrid work announcements in early February. In its press release, it was briefly mentioned that it would also introduce Cisco Private 5G for the enterprise as a managed service.

“We’re looking at private 5G from an enterprise perspective, which is what the enterprise really needs,” Mir said. “It’s not just about connecting remote workers, it’s also about bringing people, things, and spaces together.”

A link to a Mir blog post accompanied the private 5G announcement and provided additional information on Cisco’s new offering. The company plans to reveal more about its private 5G go-to-market strategy at Mobile World Congress in late February.

Private 5G is a mobile network that allows the owner to customize a wireless network with dedicated bandwidth and infrastructure to meet specific needs, such as the Industrial Internet of Things. Deloitte Consulting LLP has predicted that private 5G is likely to become the preferred choice for many of the world’s largest companies.

With its announcement this month, Cisco joins a number of major players that are strengthening its presence in the private 5G market. Amazon Web Services Inc. announced a preview of its AWS Private 5G service in November. Verizon Communications Inc. has introduced its own offering, and Red Hat Inc. believes that a software-defined private 5G solution can be implemented at the edge with its OpenShift Container platform.

Cisco’s message, based on exclusive SiliconANGLE interviews with Mir and Dorai, is that enterprises shouldn’t have to choose between Wi-Fi and 5G wireless standards to run a business and accelerate the transition to hybrid working.

“We believe the combination of Wi-Fi 6E and 5G for private networks will accelerate this journey,” Mir said. “We are going to create a continuum; companies do not have to make a difficult choice.

Watch the full video interview with Mir and Dorai below:

The industrial use case provides fertile ground for this approach. Early adopters of private 5G include Bosh, Fujitsu, General Motors and Ford. Cisco’s strategy for private 5G in factory environments could offer significant appeal, according to Dorai.

“When you connect your phone or laptop for basic browsing, Wi-Fi is sufficient,” Dorai explained. “But if it’s a process automation factory where you need seven nines of reliability, Private 5G is the best technology. These two technologies, 5G and Wi-Fi 6E, will work hand in hand. hand to deliver impressive results.”

The reality is that many business leaders around the world have been trying to come up with the hybrid over the past couple of years. While some have succeeded, there have also been many hurdles as companies have struggled to build a flexible, scalable, and cost-effective infrastructure.

It’s a tricky combination, and Cisco is betting that the next generation of wireless technologies and new switching technologies will improve the transition to hybrid working.

“No one could have predicted the world we operate and live in,” Huang said. “It’s about investing in flexible architectures and platforms, which enable our customers to support the use cases they thought of, as well as those they never anticipated.

Stay tuned for the full video of the event. (*Disclosure: TheCUBE is a paid media partner for the “Cisco: Powering Hybrid Work” event. Neither Cisco Systems Inc., the sponsor of theCUBE event coverage, nor other sponsors have editorial control over the contents of theCUBE or SiliconANGLE.)

Show your support for our mission by joining our Cube Club and our Cube Event community of experts. Join the community that includes Amazon Web Services and Amazon.com CEO Andy Jassy, ​​Dell Technologies Founder and CEO Michael Dell, Intel CEO Pat Gelsinger, and many other luminaries and experts.