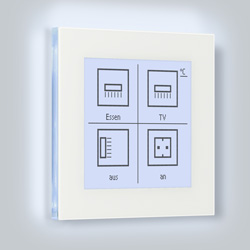 The KNX push button is the size of a switch, and its monochrome touchscreen and glass frame create a single unit. When the screen is touched, the lighting turns on and also radiates into the frame. Exciting light reflections are made in the glass and on the wall.

The flexibility of the push button extends to programming options in the KNX app. Here, users can define the number of visible touch surfaces and the functions they offer, such as switching, dimming, moving a blind, sending a value or calling a scene. . Each surface can be labeled with an icon and text by the bus. Modified text can indicate, for example, whether a luminaire is on or off. This allows users to orient themselves easily. Another function is called by touching with the palm or by sliding. This surface function is normally assigned to the main function of the respective room, such as light or a scene.

The display illumination is switched to two levels: Operating and basic illumination. Both brightness and timing are set independently. Finally, the lighting can also be completely switched off. In standby, the push button therefore consumes very little energy. However, the fields can still be identified and the device remains ready for the next entry.