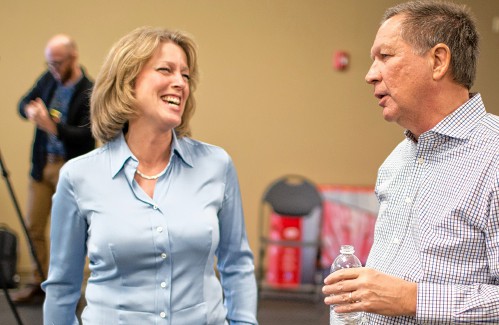 CLAREMONT – Disenchanted with the leadership of the Republican Party under Donald Trump and appalled by the riot in the US Capitol on January 6, 2021, former Claremont Mayor Charlene Lovett has changed her party affiliation and is seeking the Democratic nomination to the State Senate in the newly drawn District 8.

Lovett said it was Trump’s victory in 2016 that first got her thinking about switching parties.

“Part of the direction the party was going wasn’t where I wanted to be,” Lovett said. “The party of my early years is not the party of today, and there were a lot of decisions made nationally by the Republican Party that I disagreed with.”

Ultimately, it was violence on Capitol Hill by Trump loyalists trying to disrupt the election process that decided it for Lovett.

“When January 6 happened, my only words for it: it’s an abomination,” she said. “Having served my country for 22 years, I never thought I would see what I saw on the steps of the Capitol in the United States. This scene will forever be etched in my memory and it is not what I expect of our country.

(Lovett spent 22 years in the military, retiring in 2003 as a chief warrant officer.)

Lovett’s decision to run as a Democrat because of Trump’s influence on the GOP mirrors that of Sue Prentiss, Lebanon’s first female state senator from District 5. Like Lovett, who served as mayor of Claremont from 2016 to 2021, Prentiss is a former mayor and a former Republican.

Trump’s election was the tipping point for Prentiss.

“He was acting in a completely opposite way to the way I behave,” she said of her role on the Lebanon City Council and the Statehouse. “It made me feel uncomfortable. It wasn’t the Republican Party that I know.

Whether Lovett’s decision means other disgruntled Republicans head for the exits remains to be seen.

Asked if Lovett’s decision would lead more Republicans to decide that a Trump-influenced party wasn’t to their liking, Aron replied succinctly, “No, I don’t.”

Aron did not elaborate, but added that Republicans expect to have a full slate of House candidates for the Sullivan County races in the November general election.

If Lovett, who served one term in the New Hampshire House as a Republican during the Obama era, finds herself without a primary challenger, she will likely face incumbent Ruth Ward, R-Stoddard, in the November general election.

The newly redesigned district includes 19 towns and the town of Claremont spread across the counties of Cheshire, Merrimack, Hillsborough and Sullivan. Charlestown, Newport, Croydon and Sunapee are the other Upper Valley towns in the district.

Lebanon City Councilwoman Karen Liot Hill, who switched from Republican to Democrat in the early 2000s, said she thought there were more Republicans – voters who backed Mitt Romney, George W. Bush and the late John McCain – who sympathize with Lovett.

“I think moderate Republicans during the Trump years wondered if they fit in with the Republican Trump Party,” Liot Hill said. “They ask, ‘Is there really room for me?’ ”

Trump teased his supporters with a possible race to regain the White House in 2024. Liot Hill said it would be interesting to see what impact Trump’s decision will have on Republicans.

“The jury is still out on that,” she said.

Prior to Trump’s political rise, Claremont was a reliable Democratic stronghold.

John Streeter, a Charlestown Democrat who serves as chairman of the Sullivan County Democrats, said Lovett’s defection should not be seen as a sign the city is returning to the Democratic column.

“I just haven’t seen enough to say,” said Streeter, who made unsuccessful bids for the New Hampshire House in 2018 and 2020.

From his perspective, Democrats “will make room in their tent for former Republicans and others who can rationally have conversations (on the issue). I welcome Charlene to the Democrats.

“I’ve never had a problem with Republicans because I believe in the voice of other people’s opinions.”

Where he doesn’t believe there can be any common ground is for a Trump-like mentality.

“When you lie, cheat and steal to end democracy, there’s no room for you,” Streeter said.

Republican Grafton County Chairman Bruce Perlo dismissed talk of Trump and whether Republicans were divided by the former president. Trump’s 2024 decision won’t be an issue in the election later this year, he said.

“I’ve spoken to more active Republicans in the county, and I can’t think of a time when Trump shows up,” Perlo said in a phone interview. “They are more focused on the state and the national economy. It’s not about Trump and whether someone loves him or hates him.

Perlo said the party is also focused on maintaining control of three elected branches of state government — the governor, executive council and legislature — and challenging incumbent Democrats for the U.S. House and Senate.

“There is optimism we can change that. We’re pretty excited about it,” Perlo said.

Lovett said she doesn’t want to make a formal decision about her party until her term as mayor ends at the end of 2021.

While her House voting record supported legislation restricting partial abortions and requiring a 24-hour waiting period for abortions, Lovett said she had changed her mind about reproductive rights.

“Times have changed and some of my votes in the Legislative Assembly from over a decade ago do not reflect my positions today,” she said in a statement about her candidacy.

“My position on abortion is that it’s a health care decision,” Lovett said. “I don’t believe the government should be involved; that is, between the health care provider and the individual.

Another motivating factor in his decision to run for the state senate seat had to do with funding for Planned Parenthood in New Hampshire.

“What really galvanized my decision to run for a state senate seat was that I couldn’t believe what was happening with reproductive health care,” Lovett said. “When the Executive Council voted not to fund Planned Parenthood of Northern New England, I was really disturbed.”

The Executive Council, which approves state contracts, has voted repeatedly to suspend funding for Planned Parenthod and other family planning clinics that offer abortions. Republican members cited a state law requiring separation between government funding and abortion services, but they continued to vote against the contracts even when the state attorney general assured them that the finances of the clinics were compliant.

Lovett said that as a Valley Regional Hospital board member, she understands the role Planned Parenthood plays in the community health care system.

“We have a real shortage in rural areas of health care providers who can provide this type of health care,” Lovett said of Planned Parenthood, which recently announced the closure of its Claremont clinic.

If elected in November, Lovett said she would make education funding a priority. She’s seen communities wondering what services to cut because the state hasn’t properly addressed school funding, even 25 years after the state Supreme Court’s Claremont decision that found the state was failing to comply. its constitutional obligation to fund adequate education.

“We need a real partnership between the state and municipalities to fund public education responsibly,” Lovett said.

Patrick O’Grady can be reached at [email protected]